Taking the workforce seriously and treating people fairly and well is not served by mechanical approaches that hide as much reality as they purportedly reveal. Yet too often those proposing radical reform see the need to squeeze things that are by their nature hard to measure uncomfortably into a single box of a spreadsheet. That risks failing to do justice to the issues involved.

Their aim is an admirable desire to ensure a focus on fairness to stakeholders — in this case workers — and to drive long-term business success. Yet the approach is surely wrong-headed. Things absolutely need to change, but it would be best to focus on the areas where change can best be delivered and where it will have the greatest effect.

Two recent reports suggest specifically that investments in people be added to corporate balance sheets. One is in the US, Leo Strine’s Toward Fair and Sustainable Capitalism (see The Limited Responsibility Company), and the second in the UK, part of the British Academy’s Future of the Corporation work. This blog seeks to unpack these proposals, to the extent that they are clear, and test whether there is a better route to achieve their aims.

Strine is most explicit. One of his headline calls is: “Change accounting rules to treat investments in human capital like other long-term investments and require companies to disclose more information in narrative form about their human capital investments.” The second portion of this is unarguable, particularly in a US context where companies report little — mostly because they claim to feel constrained by litigation risks to disclose only what they are required by regulation to disclose. But the first portion is rather more debatable. In case there is any doubt about the proposal, the unnatural revolutionary later makes his meaning explicitly clear:

“instruct the Financial Accounting Standards Board to revise generally accepted accounting principles to treat investments in human capital as capital expenditures like investments in plants, property, and equipment”

His intent is that investments in human capital should be capitalised on corporate balance sheets.

The Future of the Corporation’s proposal is less explicit — indeed a cynic might say that the bulk of its Principles for Purposeful Business is opaque and too high level to be meaningful — but appears to head in the same direction. It states that: “Measurement should recognise investment by companies in their workers, societies and natural assets both within and outside the firm.” The confusion of what is actually being proposed is shown by its call both for a “greater consensus … and standardisation of available information” and that “the board of a company should determine the firm-specific metrics against which fulfilment of purposes … can be evaluated”. How measures can be standardised and at the same time bespoke and company-specific is a mystery to me at least.

The intent of the Principles for Purposeful Business is made less opaque in one of its underlying papers, How to Measure Performance in a Purposeful Company? This states:

“from a purpose driven, non-financial management perspective, investments into training of employees is viewed as an investment into building social and human capital for the company and its employees. This investment would be expected to yield positive operational results and should therefore be capitalized.”

Again, the intent seems to be that investments in human capital should be capitalised on corporate balance sheets.

There are practical challenges around this — not least the question of whether such capitalised employee assets should be amortised or subject to periodic impairment assessments. Those who follow accounting debates will know that this is a highly controversial area where there is much doubt about the effectiveness of the impairment process — but also a recognition that amortisation does not really reflect the economic reality of many capitalised assets, which often endure rather than deteriorating in value on a straight line basis over an arbitrary period. If we did capitalise it as an asset, would the value of training simply be amortised, or would it be written off when significant numbers of the trained individuals departed the business or a business process changed?

There’s the old adage about half of the spend on advertising being wasted but that it is impossible to know which half. Investing in a business’s people surely suffers from a similar challenge, with the added complication that it is impossible to know how much of the half of spending that hits home will in practice remain in the company to its own business benefit. This makes both impairment and amortisation models hugely challenging. But none of the proposals I have seen suggesting that these be balance sheet assets have started to consider the most basic practical challenges around their proposal.

There is also a philosophical challenge — to whom does the value of training belong? It is surely hard to state that the value of everything in staff members’ heads belongs to their employers. The old saw of the majority of some companies’ value going down in the lift at the end of the day is a truism, so saying that training is a capital asset for the corporation is surely philosophically difficult. Regular readers will not be surprised to find that I do not wholly agree with Milton Friedman’s take on human capital, as set out in What is human capital? on the ever-excellent Aeon. This argues that the concept was invented as an argument in the Cold War, turning each individual into a mini-capitalist hawking their personal assets around businesses. The long-term consequence of this approach appears to have been divesting in people rather than the opposite — but the philosophical point that a person’s brain cannot belong to a corporation surely has some weight.

Friedman’s argument that it is for individuals to invest in themselves and that corporate spending on staff training is worthless is clearly wrong. But seeing training and employee relations as generating an asset purely for the corporation must also be wrong — it must be about generating productivity within the business and about employee retention. It is certainly hard to keep good staff if the message to them is that they do not matter to the organisation.

The academic literature on intangibles, which for many include aspects of employee skills and experience, focuses most often on the challenges with inclusion in accounts that arise from difficulties of measurement and objectivity. But as IAS 38 on intangibles clearly recognises, separability from the operating business is key — how can intangibles be calculated as separate assets when they only exist within the business processes? This is why many investors (and preparers of accounts) are frustrated by the current rules requiring the breakdown of goodwill into some separately calculated intangible assets — which exist only for accounting purposes because they cannot in practice be severed from the business as an operating business. That intimacy with ongoing value creation is precisely why these contributors to corporate value matter so, but that does not mean they need to be turned into balance sheet assets. Putting a false single value on something core to the ongoing business is more likely to mislead rather than inform (see What gets measured gets managed, unfortunately).

At their hearts, these proposals to capitalise employee expenditure are attempts to deliver greater fairness between spending on staff and spending on capital assets, and attempts to avoid disincentivising investment in people, which has led in part to less productivity in business. What might be a better approach to deliver on this intent?

Many will find it hard to disagree with the conclusions of the Brookings Task Force on Intangibles, as quoted in a 2019 FRC discussion paper on the issue:

“After some internal debate and extensive interviews with individuals preparing financial statements, users, auditors, standard setters, and regulators, the task force has concluded that the debate about capitalization versus expensing of R&D focuses on the wrong problem. What investors want, and need, is information about the value of internally developed intangibles and the other factors that drive the value creation process in firms.’’

This is also the conclusion of the IIRC (International Integrated Reporting Council). While its model talks about six capitals, one of which is human capital, it doesn’t argue that these need to be capitalised assets on balance sheets. Rather, first it notes that each of its six capitals are simply reminders for companies to ensure that their understanding of value creation fairly respects all relevant stakeholders, and that companies are not expected always simply to report on each of the capitals separately but should consider how they are best reflected in the company’s business model. As an aside, it would be great if more (some!) integrated reporting companies respected this call to think independently. But more relevantly, the IIRC model is that the capitals should be disclosed in the narrative reporting, using KPIs and hard metrics of performance and what has been delivered over the reporting period, but not altering the financial reports themselves.

This is the general model of the IIRC — that the reporting on key issues should be in the narrative section of reporting and not influence the financials. This seems wrong in some areas, such as climate change, where the financial implications of carbon constraints will need to be fully integrated into the balance sheet and income reporting by companies — as Nick Anderson of the IASB has recently acknowledged. But the approach does seem right for human capital issues.

At its heart, what matters is not what is on the balance sheet, but that management should not be disincentivised from appropriately and fairly investing in the long-term of their business, including in the skills of their people. That’s why a recent study by Nesta is for me so depressing. The Invisible Drag on UK R&D demonstrates just how short-termist are the measures applied by the bulk of UK corporations (and there is no reason to assume that the UK is any worse than other markets, so this criticism is likely to apply to most public companies): 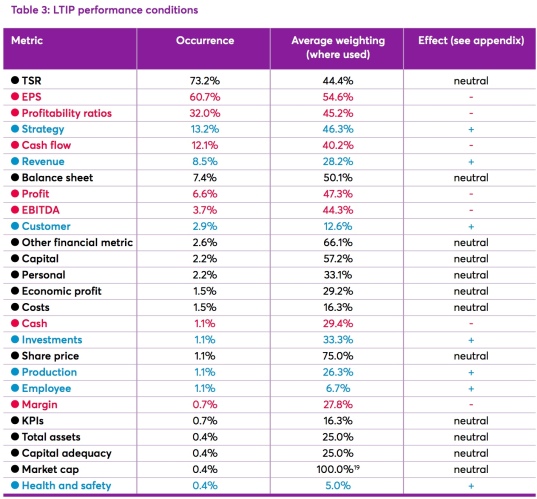 In particular, the chart shows just how low a rating most companies place on employee issues. It appears that just one company across all the UK listed businesses studied uses a health and safety measure, and only three use other employee measures in assessing executive performance. Even when they are used, their proportion within the overall incentive structure is so low as to be largely irrelevant. And unfortunately the three-year time horizon typical of LTIPs and their total shareholder return (TSR) measures is not sufficient to compensate for this as any underinvestment in staff skills is unlikely to become reflected in share prices over such a time period, whereas the cashflow benefit from the underinvestment will be felt immediately. The statistics for bonuses are no better: employee measures represent only 4.1% of the non-financial performance metrics, with a further 12% using health and safety measures; again, even where these metrics are used the portion of the overall incentive that they represent is paltry.

It is perhaps no wonder that the UK has a productivity problem if no senior management has any incentive to invest actively in their people — indeed they appear to have active disincentives from doing so. Let’s address that problem fairly and squarely rather than reshaping corporate balance sheets as an indirect — and highly dubious — route towards the same direction.

I explored some of the ideas in this post further in: Better ways of showing how people matter

The Invisible Drag on UK R&D: How corporate incentives within the FTSE 350 inhibit innovation, NESTA, 2019