There’s a huge irony in talking about fairness and executive pay.

So deeply inculcated in humans is the sense of fairness that while it is hard to believe that increments on significant incentive pay can create a greater incentive to perform — most doubt that a CEO will genuinely work harder if paid £4 million rather than £3 million — there is nonetheless scope for rewards to operate as a disincentive. If others that the individual perceives to be peers are all paid £4 million then the CEO will feel hard done by, tough though that is for a thoughtful independent third party to believe. The sorts of people who become CEOs of public companies are by their nature more than marginally competitive.

But this sense of feeling hard done by is pure perception. In their excellent paper The Pay of Corporate Executives and Financial Professionals as Evidence of Rents in Top 1% Incomes, Josh Bivens and Lawrence Mishel of the US’s left-leaning Economic Policy Institute provide significant evidence that there is rent-seeking in executive pay. This is strongly suggestive that the roles would still be attractive if executives generally received lower levels of compensation — so that CEOs would work as hard if they were paid £3 million rather than £4 million. It is not that the quantum is necessary, it is just that it is expected because others get that level of pay — so that £3 million will be ‘enough’ only if others also receive similar amounts. But £2 million would also be ‘enough’, as long as others received similar amounts.

These days the peers that CEOs measure themselves against in this way are international. Bivens and Mishel acknowledge the negative influence that US pay structures and levels are having on the rest of the world. Yet just this week the latest statistics from shareholder advocacy group As You Sow on the votes of major US mutual fund groups reveal the extent to which many institutional investors bless the surprising structures and pay levels typical in the US. Even among the pay schemes enjoyed by what As You Sow deems the 100 most overpaid US executives, Northern Trust backed them all in 2018, Fidelity opposed just 7%, BlackRock 11% and Vanguard 14%:

These numbers are at least a toughening of positions on previous years’ stances — all of these investment houses, and 20 in total, had opposition levels in single figure percentage points in As You Sow’s 2017 report when the campaigner challenged: ‘Are fund managers asleep at the wheel?’.

Yet even a very basic set of standards with regards to executive pay leads to remarkably different voting results. A few years back I set out some basic requirements on performance linkage for my investment institution, meaning that US schemes would be opposed if any one of these triggers was breached: supposed ‘long-term’ rewards are released within 3 years of award; more than 25% of awards are time-based only and not performance-linked; and rewards paid out if they applied a total shareholder return (TSR) metric that allowed a payout for underperformance, that is if TSR was below median of the peers. This doesn’t amount to more of an insistence than that there should be at least some limited degree of genuine long-term performancing of US awards (not least given the quantum that is standard in that country), but even just applying these very simple requirements led to my employer opposing 74% of all remuneration resolutions in North America in the last full year I was responsible for those decisions.

The negative influence of US pay practices and quantum is shown very clearly by statistics from UK campaigner the High Pay Centre. This chart is from their August 2018 High Pay Centre/CIPD FTSE 100 executive pay survey report: 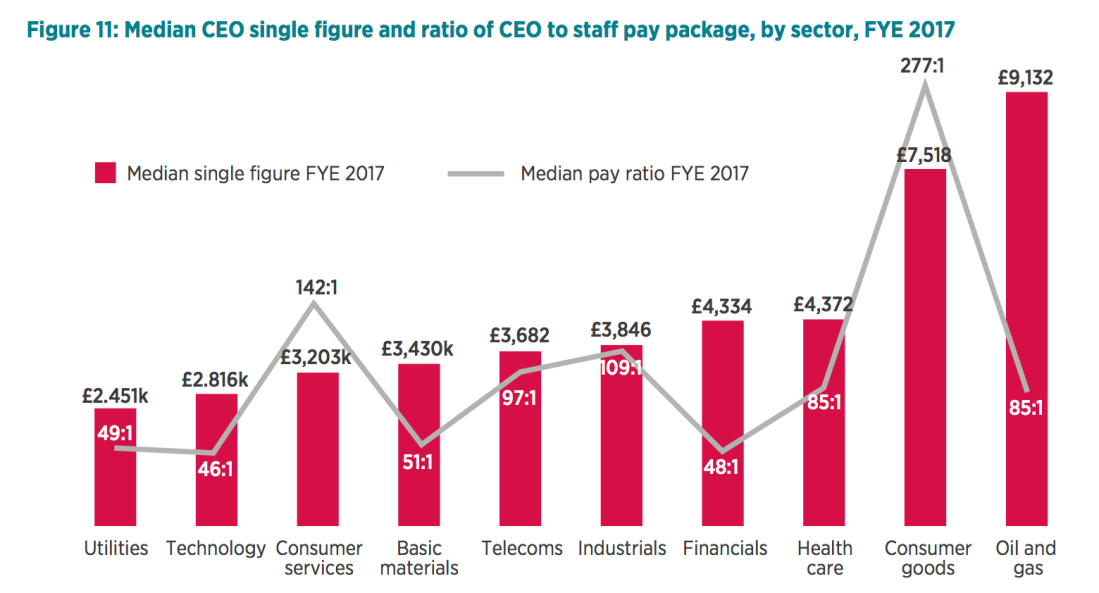 Those sectors where CEO single figure pay is above £4 million are those where there is a clear international market for talent. Pay has been pulled upwards in those sectors where UK companies face global competition.

It’s also worth noting as an aside that the High Pay Centre numbers show that median UK CEO pay has stayed roughly level from 2011, when it was £3.90 million, to 2017, when it was £3.87 million. It does not appear that executive pay is becoming more of a problem, at least in the UK, even if the attention focused on the issue, and on the generosity of specific outliers, continues to become more intense.

But there is a clear problem. These charts from my excellent colleagues at governance data shop Aktis tell a remarkable story*: 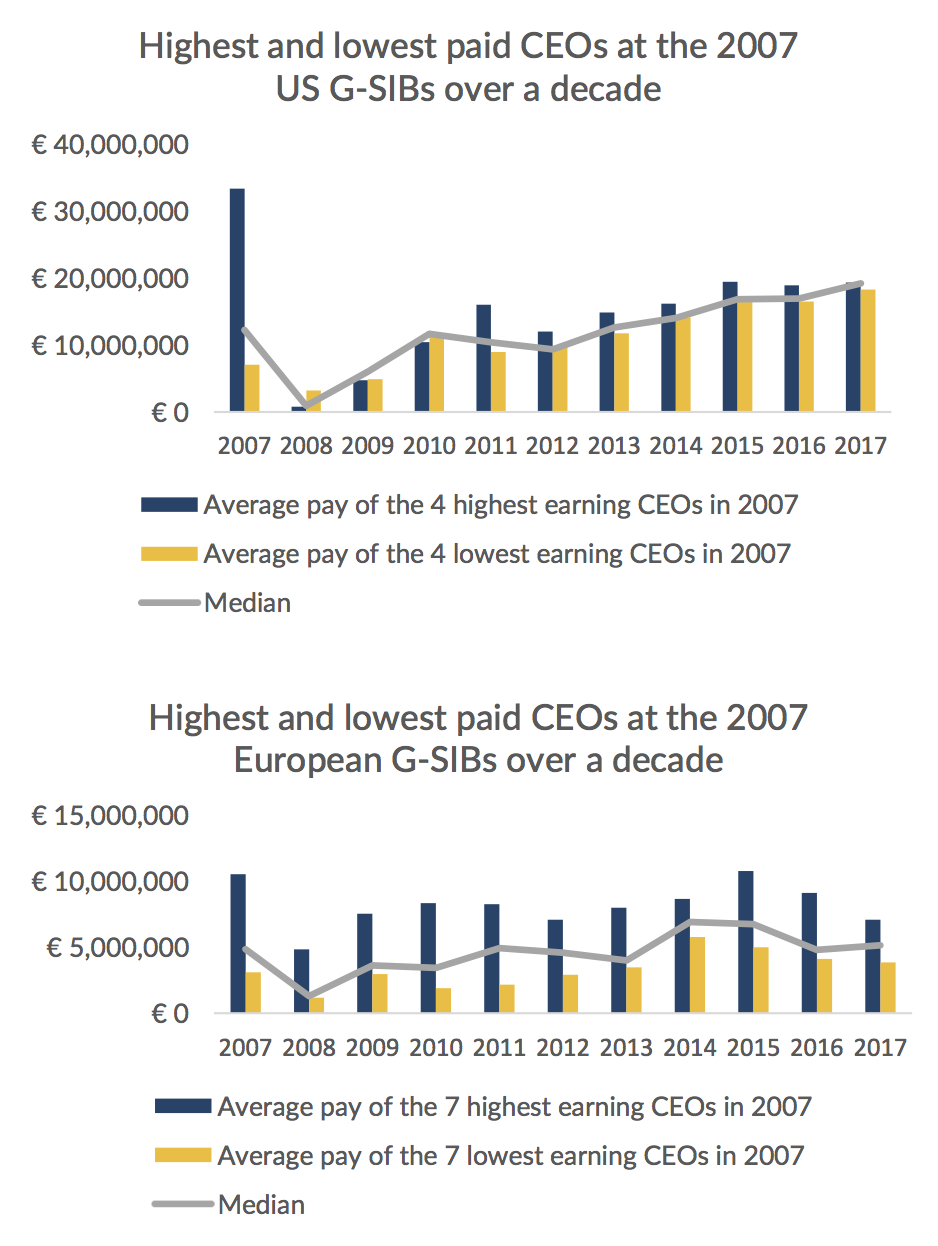 This close compression of pay at US banks — in effect they all seem to pay the same amount — strongly suggests that their directors believe that there is a going rate for the job. In short, compensation committees seem to have come to the bizarre conclusion that it is more important to pay at the same level as their peers than it is to pay according to the executives’ performance. This demonstrates the benchmarking ratchet in visible practice. Encouragingly, there is no such compression seen in the European figures; performance seems to be more of a driver of pay in the region (as well as overall quantum being lower).

Nassim Nicholas Taleb has argued (see his 2018 book Skin in the Game or Inequality and Skin in the Game) that it is this mindset that is felt to be unfairness (he uses the term inequality, but in two forms): people feel it to be unfair that time-serving should itself be rewarded. Taleb argues that no one objects to inequality that is deserved; that genuine entrepreneurs are seen to deserve wealth because their success comes from risk-taking and creativity. But merely participating in business life does not deserve huge reward — the inequality that arises from this is resented rent-seeking, he says. This just shows why fairness is a better term to use — the entrepreneur’s rewards are largely perceived as fair (unresented inequality), while the time-server’s similar sizeable rewards are seen as unfair (resented inequality).

So much for restating the problem: it’s unfair, and it isn’t working well. In many ways, things do not seem to have moved on much from nearly 20 years ago when my article Not badly paid but paid badly identified taxes, timeframes and trust as three key drivers of executive pay dysfunction.

But we need solutions not just restatements of the problem. Here are some initial suggestions:

Fairness is for management often a driver of the upwards ratchet in pay. The rest of us should not succumb to this perspective, but rather should use fairness as a lens to focus in on how the appropriateness of pay can be demonstrated. Pay structures that reward time-serving will never seem fair, but reward for performance (if at a reasonable level) can. Expecting remuneration committees to be able to explain how they have done that is a minimum expectation, and being able to do so to stakeholders as well as shareholders may provide additional challenge that helps them towards delivering in practice. And calling out any failures to deliver fairness — and calling them out on a level playing field globally — is the least that we can fairly expect from institutional investors.

* the full Aktis data is discussed in this Yahoo! finance article: New study argues US bank CEOs make too much money

The Pay of Corporate Executives and Financial Professionals as Evidence of Rents in Top 1% Incomes, Josh Bivens and Lawrence Mishel, Journal of Economic Perspectives, 27 (2013)

2 thoughts on “Resentment and rents: fairness in executive pay”